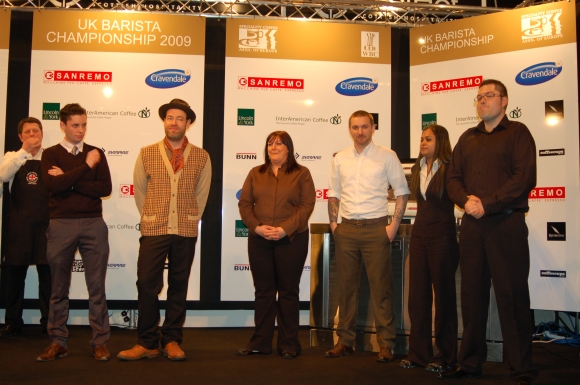 I’d travelled to the SECC in Glasgow to watch the UK Barista Championships Finals, having watched the heats online, and was hoping to learn a thing or two watching the six finalists. I came away both inspired and scared, the standard was that good.

Its kinda strange when your chatting away to a bunch of friends when you realise you’ve never met them before. John, Jess, Jim, Anette, Tristan, Hugo, Dale, Tim, Gwilym, and many others all made me feel hugely welcome, despite the fact that I had online chatted with most of them online. The community spirit that permeates the speciality coffee industry is one that constantly surprises me and bodes well for our upcoming trip to Atlanta.

The competition itself has been dissected elsewhere so I’ll keep my appraisals brief. There has been a (warranted) shift towards taste on the score cards and so it is difficult to assess the 6 competitors on the judges’ dregs I managed to swipe from the runners (despite the actions of an unnamed former WBC champion, you know who you are!). 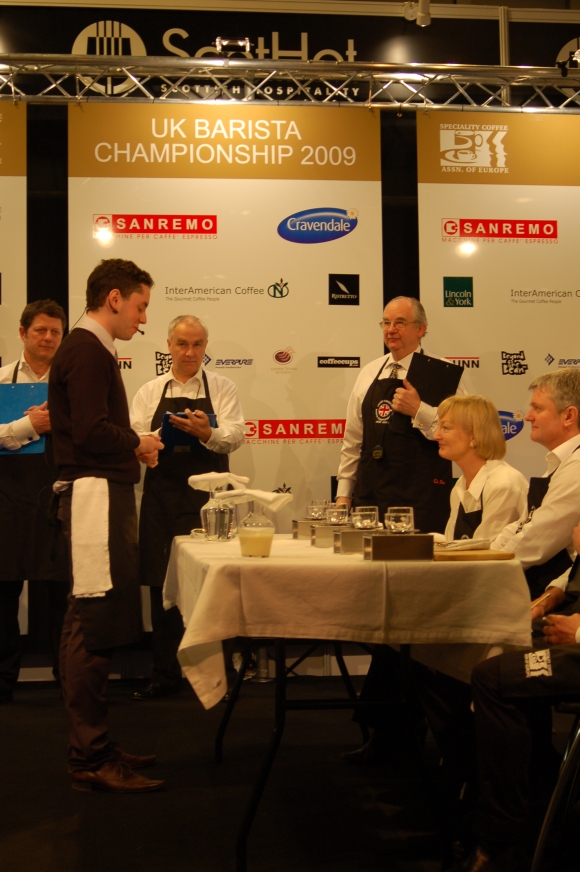 I had a pretty good vantage point for most of the competition and can honestly say that from a technical/presentation point of view there was little to nothing between the competitors. All were composed, professional and inspiring. If any of those people are reading now you can be  assured that I have nicked part of your routine and will soon pass it off as my own.

David Olenjik steps to it

Something I encountered at the NIBC was again very obvious at the National Final, the tension. Everyone is nervous. The competitors, the judges, the crowd, everyone. When the eventual winner Gwilym took to the stage, his entourage were so nervous that they hid behind the scenes until it was all over. One of said entourage and a so-called friend of the blog watched my performance in Dublin though, a tad two faced perhaps?

In the end I would imagine there was very little between the competitors, but if I was pushed I would have said Tristan/Gwilym followed by David. Having said that a final podium without the eventual triad of winners would not have surprised me. A very off-the-fence appraisal I think you’ll agree.

As far as the competition goes the standard was higher than the Irish finals but I think the stage design in Dublin was a lot better. Perhaps next year will see both the IBC and UKBC step up to the mark on both accounts. I was also surprised that there wasn’t a bigger turnout. The UK is a lot bigger than Ireland and Glasgow isn’t exactly smack bang in the middle but I still expected a larger crowd.

So as it turned out Gwilym Davies, a fellow cart barista, emerged triumphant and will head on to Atlanta in April for the worlds. He was followed in second place by Maxine Beardsmore and Tristan Stephenson in third. I’m looking forward to the WBC a lot more now and its good to know there’ll be a few familiar faces heading along too. Well done Gwilym.